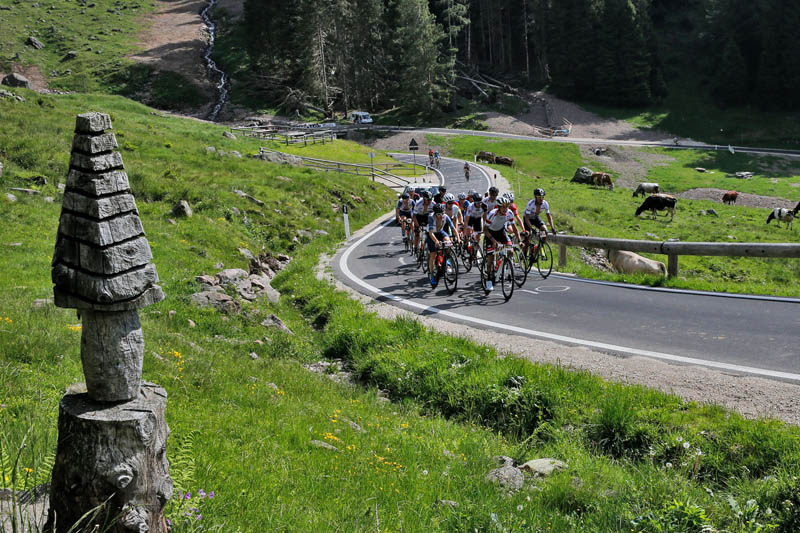 The first Granfondo of the Dolomites was organized in 1995, and during the years since has grown exponentially, becoming one of the most sought after and demanding routes for amateurs! It is called the toughest Granfondo in Europe, with two routes for cyclists to choose from, both starting from Feltre (a town in the province of Belluno), the final stage reaching Passo Croce D’Aune. The arrival of the race is in  Piazza Maggiore in Feltre. The “Cima Coppi” or Top Peak of the two races is the “temible” Passo Manghen. The Granfondo is 204 km while the Mediofondo is 133.8km.    The Sportful Dolomiti Race is run every year in June, and at the last edition there were over 4000 participants. The competition draws amateurs from all over Italy and from many European and non-European countries.  In 2019 the Giro d’Italia chose the Sportful Dolomiti Race for the 20th stage of the race. In the last few years a Mini GF for young people has been added to the race, along with a 24 hour one on a town street circuit to be repeated many times.

This website uses cookies to improve your experience while you navigate through the website. Out of these, the cookies that are categorized as necessary are stored on your browser as they are essential for the working of basic functionalities of the website. We also use third-party cookies that help us analyze and understand how you use this website. These cookies will be stored in your browser only with your consent. You also have the option to opt-out of these cookies. But opting out of some of these cookies may affect your browsing experience.
Necessary Always Enabled

Any cookies that may not be particularly necessary for the website to function and is used specifically to collect user personal data via analytics, ads, other embedded contents are termed as non-necessary cookies. It is mandatory to procure user consent prior to running these cookies on your website.